JUST MY TYPE looks and functions like a book. It has all the structural elements of a book and is created with all the traditional equipment of the letterpress printer and bookbinder. I wanted to create both a useful tool and a beautiful art object.

thinking…
I often find myself thinking about what typeface/ font/ point size to use in my letterpress printing. Computer mock-ups are never quite the same as printing with cast metal and wood type. I wanted actual printed examples (type samplers) of the different fonts and point sizes for each typeface.

unfolding…
I needed to create a folded paper structure that would present the sampler cards in a way they could be removed and returned, seen and yet protected. Then I read Hedi Kyle’s new book, Art of the Fold, and saw a variety of pocket accordion structures.

binding…
Monique Lallier’s New Oriental binding seemed the perfect way to bind the modified pockets which I had sewn on to folded stubs of paper (inner spine). The resulting book displays a range of type samplers when either lying on its substantial spine or standing with the aid of the leather covered boards.

Water is a limited resource. It is needed for all living things and must be managed well to ensure we have enough for our needs and to protect our environment. Water is the primary medium through which we will feel the effects of climate change.

I have recently begun thinking about our most precious resource – water (wai in Maori) especially since the 2016 Havelock North water contamination where an estimated 5,000 people became ill as a result of campylobacter contamination. Four deaths were linked to the contamination.

My artist’s book WATER has been selected for the 2019 Hawke’s Bay Art Review. It is an 11 page, letterpress printed hand bound book. I printed on my Cropper Carlton proofing press with wood and metal type along with hand cut type high wood blocks on 120gm Crane lettra paper. Each one sided page was folded at the fore edge and bound with navy endpapers decorated with blue foil applied with heated handmade brass tools. The book features a tue-mouche binding with gold foil titling and decoration on the cover and spine.

Recently I purchased two old wooden boxes containing brass rule and some dusty metal “sorts”. Sorts are cast metal type used for printing. I soon discovered that the sorts included some picture blocks but I could not make out what they actually depicted nor figure out how they were designed to be used.

After many hours of internet searching I found a photo of metal type that looked like mine. The American letterpress printer who owned them thought that they were from MacKellar, Smiths, & Jordan. MacKellar, Smiths, & Jordan was type foundry based in Philadelphia. It was the dominant American metal type foundry, and became the main branch in the creation of American Type Founders in 1892. It continued to operate until the Philadelphia factory was destroyed in 1910. 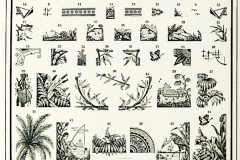 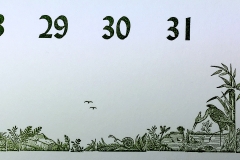 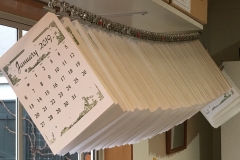 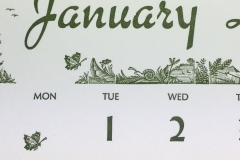 In 1892 MacKellar, Smiths and Jordan published their Specimens of printing types: ornaments, borders, corners, rules, emblems, initials, &c.  After more searching I discovered a page in their book entitled Combination Orient Border containing all the picture blocks I had. While I do not have a full set, I had enough to create a January calendar page for the Association of Hand Printers in New Zealand.

THE DIVINE MUSES was founded by Siobhan Harvey in 2003 and provides an opportunity to hear leading New Zealand poets read their own poetry. As a poet and tutor Harvey recognised there was also a need to encourage new writers to poetry and with Jane Sanders established the NEW VOICES – Emerging Poets Competition in 2012.

With the New Voices Emerging Poets Competition building each year, Harvey and Sanders decided in 2015 that they needed to look for additional funds to support the event. Lesley Smith suggested Poetry Broadsheets published by letterpress printing. Combining their interests in art and poetry, letterpress printing provides a unique way to promote poetry and create a beautiful handcrafted object.

Divine Muses has been delighted to work with some of New Zealand’s finest letterpress printers who have generously donated their time to interpret and print a poem by a poet participating in the current year’s Divine Muses evening of poetry. The resulting limited editions, printed on beautiful paper are offered for sale to build funds to support The Divine Muses and New Voices into the future.

I was partnered with Dr Paula Green and printed her poem Janet and Frank Go Rowing in silver on black 250gsm Stonehenge paper. 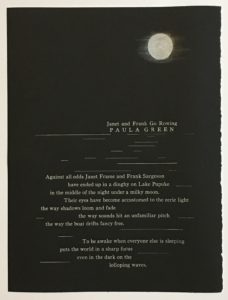